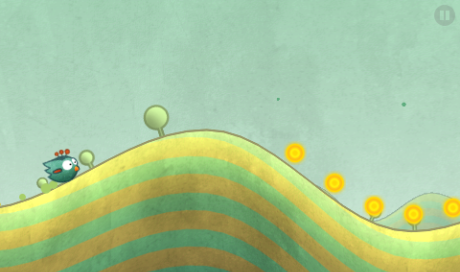 The latest hit iOS game, Tiny Wings, has done something that many thought impossible just a few weeks ago: it has knocked Angry Birds off the number one paid download pedestal on the App Store.

There are an endless list of possible reasons for the app’s success, however there are a number of vital elements in Tiny Wings (and other successful iOS apps) which developers can imitate in their own applications in order to create (at least to some extent) the same experience.

Let’s be honest, the simplest, yet most important, aspect of the success of almost every top 25 iOS game in history has been the ‘addictiveness’ of its gameplay. In this regard, Tiny Wings excels. As anyone who has played the game will know, it takes hours of play to become really proficient, and this is what makes the whole process work. By ensuring the game is simple, yet not too simple, the developers have managed to create an experience which lends itself to ‘replayability’. There is essentially no learning curve in the game: a player of almost any age can pick up an iPhone and begin playing immediately.

An essential element in the success of iOS apps is the competitiveness they inspires among friends, leading to the viral effect which your app needs to succeed. In order to maximize the chance of this, follow one simple principle: scores, not levels. There is an immeasurable advantage in users being able to compare scores directly, rather than the simple ‘I’m up to level 5’. Simply beating a friend by a tiny margin of points is enough to inspire most users to play the game over, and over again.

Again, a seemingly obvious element. Creating something which really captures ‘cuteness’ is very difficult to achieve however, it’s all too easy for the app to come off as unintentionally corny or lame instead. Tiny Wings, in a similar fashion to Angry Birds, has done it very well. A loose storyline similar to that in both of these games is helpful, but not essential. Additionally, the simple attractiveness of the user interface is something which many code-focused developers forget, and that significantly jeopardizes the success of the app, especially on a UI-centric platform like the iPhone. A simple, yet beautiful application icon is also very important: if you want your users to keep the app on the Dock of their iPhone (and you should), it needs to look good.

The time when your application has the best chance of becoming successful is, for better or worse, at launch: it receives the most media attention it will likely ever find, and offers the only opportunity to make it onto the Apple ‘featured’ list in the App Store. If your application has any bugs, even the tiniest of bugs, you will lose users fast. When playing the kind of simple games that are most successful on the platform, even the smallest bugs have the potential to wreak havoc. The central point: if you don’t think your app is completely, one hundred percent ready, don’t release it: you might only have one shot.

There are a variety of essential components in all popular iOS games: Firstly, the ability to pause at a moments notice is essential. iPhone games are largely a time-filler, and if your users can’t quickly pause gameplay when getting on/off a train or bus, you’ve already lost a considerable portion of your user base. Nothing annoys users more than losing the score they’ve worked hard to build up in a particular round because they could not pause for just a few seconds. The ability to play iPod music while gaming is another essential feature, and one which Tiny Wings missed (this complaint created a considerable amount of user backlash, and was one which the developer immediately rectified following launch).

Ensuring these components are included won’t guarantee the success of your app, but it might just get you half the way there.

August 24, 2012
PrevPreviousFlow is an all-new app for collaborative task management.
NextThe success of the Apple logo, and why your startup needs to copy it.Next