Why Gumroad is the next billion dollar startup – The developer interview 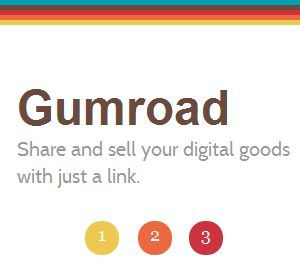 Gumroad launched this week to a huge amount of interest from consumers and from the media. The startup is basically a service which lets users buy and sell digital goods with no hassle and minimal effort. Whether you’re selling design templates, source code or sharing a private link – you’re able to monetize it in just a few clicks. We invited the developer of Gumroad, Sahil Lavingia, to have a chat to us about the huge potential of the product.

Tell us the background story on Gumroad, where did the idea come from?

The idea came from when I was thinking about retiring my first successful iPhone app, Twizzle. I wanted to see if any of my Twitter followers (the ones that knew me from my prior project, ‘One Week App‘) would be interested in getting at the source code for it for $99 or so. But I didn’t want to take the time to set up a store and then link that store from my website and then tweet about it and then check back every day to see if anything happened. So
I did a crappy job, put up a crappy store – the fastest I could – and made absolutely no money. What a waste.

So I created Gumroad to solve that problem. Now it takes literally a minute to set up a link and then you can tweet it out to whoever you want.

You coded for almost 48 hours straight to launch the project in a single weekend, has that approach proved successful? What figures following launch can you share?

Sure! Links that have been shared using Gumroad have been viewed over 10,000 times (it’s been just a day since launch) by almost 1,000 users. I don’t want to reveal $-related stuff yet, but I can say that people are already making money using Gumroad. Money they wouldn’t have made otherwise – that makes me feel awesome. A lot of people tell me “damn I had that same idea, you beat me to it!” You know how to stop that from happening? Coding 48 hours straight so that no one has the time to beat you to it. That’s why I did it – I had the idea and was so afraid someone was already working on it. Actually, I bet someone was already working on it – and has been for a while – and is probably pretty pissed off. Ha!

What monetization strategy will be implemented within the service? What makes that strategy perfect for the product?

I’m going to do a % of all sales. I don’t want to charge people who use it for fun, so I think it’s definitely the best model to go with. I also think that model is also much more lucrative if someone big uses it and makes $10k using the service (Justin Beiber, please!). I’ve made the sign up as frictionless as possible and the business model supports that.

You’re no doubt planning for the future following the huge launch of the project, what do you have in the works for Gumroad?

I’m working on making the product as it stands perfect. Making each and every feature well thought out and well implemented. Then I’ll work on the things that will make it huge. And once that’s done, I’ll work on exploring different ideas with it. I think that most things go from feature -> product -> company -> platform. That’s where I’m headed.

What makes Gumroad have the unique potential to become the next billion dollar startup?

Because it is taking a model that has worked so well for businesses and giving it to consumers. Because all I need is critical mass until people start using Gumroad to share links with their customers which automatically spreads the service. Because now there are millions of more people empowered to sell the things they never could have (or at least, never thought of selling) before – and all it took was 48 hours (to start, I’m sure this is just the beginning of the journey…).
I’m doing what Square is doing – commoditizing the process of accepting credit card payments – except I’m doing it for the open web while they’re doing it for a closed platform. And they’ve already taken notice (and sent me an email). I really, honestly, truly believe that those 48 hours could have been the most worthwhile hours of my entire life.

Make sure you check out Gumroad. You can follow Sahil on Twitter here, and have a look at his personal site here.

August 24, 2012
PrevPreviousYour product should always fix a problem, even if your users don’t realize it.
NextAn email client that achieved 20,000 downloads in a day: The Sparrow storyNext