Why your startup shouldn’t focus on growth OR profitability. 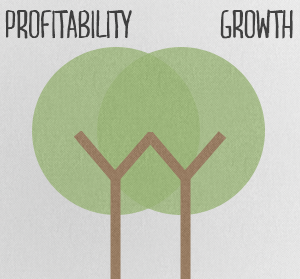 Within the world of startups today, there are two distinct opinions on the importance of growth and profitability in a business: those who believe that profitability should always be secondary to rapidly expanding the user base of the product (Facebook-style, if you will), and the alternate view that founders should focus on turning a profit before gaining millions of users. In reality, neither view is perfect.

The concept behind the ‘get millions of users first, then try to become profitable’ argument stems from the monumental success stories of Facebook, Twitter and the like, who, despite having hundreds of millions of users, have only recently turned an eye towards earning revenue. In principle, the philosophy sounds wonderful: who cares if the business isn’t producing any revenue when you have millions of users and investors banging on your door? For a limited number of companies, the model works, but for the majority: it is often a tumultuous path to follow. For a bootstrapped founder, relying on the belief that your business will be the ‘next Facebook’ is a big risk to take, and in reality, one that isn’t likely to pay off. As a founder, investing your life savings into launching your startup means that you need to treat the business with some kind of rationality – don’t get caught up in the rollercoaster ride of entrepreneurship and forget whose livelihood is a stake if the venture fails. That said, if the risk is worth taking, then you better jump on board and iterate and expand your user base as fast as you possibly can – the Facebook method only works at the extreme end of the users vs expenses spectrum, and that’s where you need to be aiming.

The opposite view to this is that founders should focus on producing revenue ahead of expanding the user base – perceived by many to be the ‘safety-first’ approach. Focusing on producing revenue can mean a lot more than just reducing risk however, and that is often forgotten. For investors, revenue instills confidence, and profitability instills even more confidence – and if you’re looking for investors for your startup, producing revenue is often a great way to go about it. For many founders, the simple fact that the risk is reduced is often enough to choose this method – having your bank balance increasing rather than constantly decreasing is vital for many people. The downside of this method is obviously that the possibility of growth is often reduced: charging for a product often means that the likelihood of becoming the next million-user company is reduced. For many entrepreneurs however, a level of success in which a steady income can be found is more than enough.

The number of companies who have failed through the ‘Facebook Method’ far exceeds the number who have succeeded, yet the value of those few companies is likely equal or greater than the cumulative value of the ‘profitability-first’ style businesses. The consequence of this is that, for the majority of founders, the best approach will be choosing neither of these options, but finding a suitable middle ground. It is certainly possible to be a profitable business while still expanding the user base at a reasonable rate – and that’s where many founders should be aiming.

August 24, 2012
PrevPreviousHow I doubled the price of my software product – and sold ten times as many copies.
NextHow my startup launched to 50,000 daily pageviews with just a few emails.Next