Stay inspired, not on auto-pilot – An interview with Fantastical’s Founder 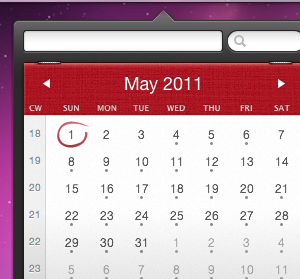 Fantastical is an all new calendar for Mac, which works as a (beautiful) front end for iCal, Outlook or Entourage. It offers one of the most well designed user interfaces of any Mac application on the market. To share the background story on Fantastical, and to offer his advice on the world of startups we invited the co-founder of Fantastical, Michael Simmons, to have a chat.

How did Fantastical come about? Tell us the background story on coding, designing and launching the application.

My business partner, Kent Sutherland, created a natural language parsing engine in college. The engine would take inputted text and convert it into a value. The engine is also a learning engine so it can actually learn different input patterns, ultimately the user’s input expressive and natural. Kent was asking me for some ideas on what we might be able to do with the engine. As someone who has a very full calendar and someone who also knows how bad the current calendar “experience” is, it was natural (pun intended) to pair up his engine with a calendar application that would make the creation and management of events much easier than ever before.

So, Kent and I started developing Fantastical. I designed most of the user interface and user experience: how the app would look, feel, and work. It was really important to me to have Fantastical be something you could quickly open, quickly enter your event, and quickly get back to what you were doing. Kent’s engine (and the hundreds of testers we had who provided example events during our test cycle) is the reason Fantastical’s event parsing works so well.

We worked on Fantastical for almost a year to the day and launched it on May 17, 2011. The launch went incredibly well, and Fantastical continues to be in the Top 50 Grossing of the Mac App Store, which seems to be a good indicator that users love it as much as we loved making it.

You took the time to implement fantastic natural language parsing for event-creation in the app, how critical are such distinctly user-friendly features in an application? What advice would you offer to fellow developers in regards to implementing a UI designed to ‘fit around’ the user?

Extremely critical. As I already mentioned, user experience is paramount to Flexibits, so the app has to work the way a user expects it to work. Let’s say we had a less powerful and less expressive natural language parsing engine, users would be disappointed having to re-enter or edit their input. The purpose of an app is to make a user’s life better, not cause frustration or confusion.

For another example of how important the user experience is, look at the animation that appears when you type. The words animating into the event area was definitely intentional. It not only looks pretty cool, but more importantly, it conveys “what just happened” to the user. This is just one of the many user experience details we thought about when designing Fantastical.

The advice I would give to fellow developers is to think about everything going on in the app from the user’s perspective. If you’re not making the user’s life easier or helping them be more productive, then what’s the point? As developers, we should always be thinking of ways to improve apps and the user’s experience.

To design the interface in Fantastical, you hired an external designer – would you recommend that other startups do the same?

External or internal, I would definitely recommend that other startups have a talented designer. After all, how your app looks is 50% of the battle. Of course, you can’t have style without substance, so the design has to be relevant and not just superficial. But, there are many good apps that are ugly, so they’re not appealing. It depends on the budget and the amount of work you have for the designer, but either way, definitely have a talented designer.

Fantastical has received some criticism for the price of the software – $19.99 – what advice would you offer to other developers in that regard? What led you to the decision regarding the price?

Pricing is my favorite topic and one I talk about at conferences and with clients I advice quite a bit. One size doesn’t fit all, but the advice I would give would be to look at the market. Consider the genre of your app and the competition. The criticism we receive on the price wasn’t as prevalent as we thought it would be (consumers almost always complain about price). In fact, there’s a saying that if you don’t receive a lot of complaints on your price, you probably priced it too low. We really think $19.99 is a fair price considering the amount of use customers would get from Fantastical. It’s a calendar app, one that users who need such an app should be using multiple times a day. Not to mention an app that will make you more productive and help you manage your schedule.

What is your opinion on the Mac App Store? Has it changed the way you approached development of Fantastical?

The Mac App Store has been really great for us. More importantly, the experience for the customer is unparalleled. As long as you have an iTunes Store account, you simply click the Buy button, the app downloads and is ready to go. Plus, the marketing we’ve received from Apple (in terms of being featured) has brought a lot of attention to Fantastical.

Since we have a trial version available, users can also purchase directly from our Flexibits Store. Many users have commented how they appreciate that they can buy from us directly, plus we offer in app updating via Sparkle and our purchase process is very close to Mac App Store. In fact, Fantastical can be purchased directly within the app and is auto-licensed.

To support the Mac App Store and our own store, we had to make some minor changes in our development (ensuring we don’t use private API’s and being aware of the Mac App Store’s rules), but it’s been very easy to implement and we’re able to provide options, which is always the best experience for a customer.

Finally, what advice would you offer to aspiring entrepreneurs and developers looking to launch their own application?

Believe in what you’re doing. It might sound like a cliché, but it’s the truth. Passion rules! You should be working on products that *you* would want and then make them the way *you* want to experience them. Another piece of advise is do make sure you look at your roadmap or plan at least once a month. You don’t want to get too far off track and you want to stay inspired, rather than stay on auto-pilot.

I would also repeat to what I said earlier about design. Hire a good designer (whether full-time or a contractor) and make sure your app looks as beautiful as it is functional. If it’s not pretty you definitely won’t get admiration from users. Here’s a good way to demonstrate my point… think about the apps you love. I’m going to take a guess and say that they are all well designed and pretty. Right?

August 24, 2012
PrevPreviousDon’t think of non-paying users as a burden, but as an advertising expense.
NextNaming Your Product – The BugSense InterviewNext