An email client that achieved 20,000 downloads in a day: The Sparrow story 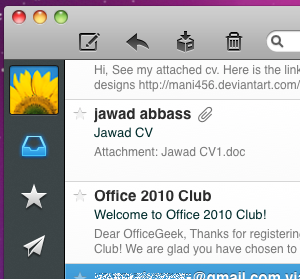 Sparrow is a new email client for OSX  that has taken the Mac world by storm: it was downloaded over 20,000 times on launch day, and has been downloaded 100,000 times since the Mac App Store launched in January. The application is simple, and offers a beautiful interface to manage your email. To hear the background story on Sparrow, we invited it’s co-founder, Dominique Leca to have a chat.

Tell us the story behind Sparrow, where did the idea come from? How did you develop and launch the product?

Similar to many other startups, Sparrow started as a side project. Neither Hoa  (my co-founder) or myself were satisfied with the mail experience we had on the laptop and we just thought we had to give it a shot. Hoa has been developing a proprietary mail engine for 10 years as a personal pet project. We had the technical tools to make something new both on the backend and on the front end so we decided to move on with the experiment and create a mail client we would feel comfortable with.

Sparrow achieved 20,000 downloads on launch day, how did you cope with that huge demand?

We didn’t cope with it:) At first. That was quite a surprise. Sparrow beta 1 was quite buggy and we weren’t expecting anything near what happened. The TechCrunch article boosted downloads and we had to quickly create a way to gather feedback. Get Satisfaction was a really great tool to channel user feedback and advice, and create a community around Sparrow.

What are your thoughts on the Mac App Store? Has been a help or hindrance in regard to sales?

The Mac App Store is a wonderful tool and distribution platform. Most of our sales come from there and it offers a visibility that we would never have had anywhere else. Having said that, and having an extensive experience of the iPhone and iPad appstore, traffic on the Mac App Store is still pretty low compared to the mobile platform but it is growing fast. For any newcomer to the Mac platform and development, this is definitely the place you want to showcase your software.

Similar to Sparrow, is offering a ‘lite’ version of paid software a good path for software developers to follow? Has the use of ads in the free version been worthwhile?

Lite versions are always nice for uncertain users and for virality. The flip side of this is that you have to maintain 2 versions of your software and that you have to develop the freemium version in a way that users have sufficient incentive to get the paid version without having a Lite version that is too poor in terms of features. The use of ads is worthwhile in the sense that it serves a double purpose in our case: it is a way to generate revenue but also a way to distinguish the Lite version from the paid one.

What advice would you offer to other aspiring software developers and entrepreneurs?

Build, launch, gather feedback, improve and iterate but more importantly, build something you want to use.

August 24, 2012
PrevPreviousWhy Gumroad is the next billion dollar startup – The developer interview
Next“Don’t start a company simply for the sake of starting one” – The Posterous InterviewNext