How changing the name of my webapp quadrupled signups. 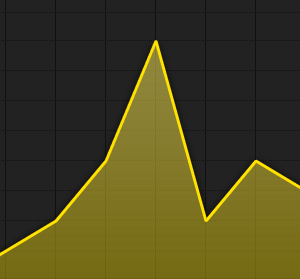 The name of a product often means a lot more than many people realize: it plays a major role in determining both the quantity of media coverage that the product receives, and in shaping how potential customers view the application. This is the story of how a developer, by simply removing the vowels from the name of his web app, literally quadrupled monthly signups instantaneously.

Following our recent article titled -‘how i doubled the price of my software product – and sold ten times as many copies‘ we received emails from numerous developers with similar stories to share regarding their own startups, and today we are sharing one of those tales. The developer who’s application we are covering wishes to remain anonymous: please understand that this anonymity is what allows us to share specific user signup, traffic and revenue statistics in these articles that the developers wouldn’t otherwise be comfortable sharing – the anonymity is a worthwhile sacrifice in our opinion- but let us know your thoughts in the comments below. For the purposes of this story, the developer will be known as ‘Steve’ and the product name, ‘Discover’ (at least originally!).

Discover launched in March 2010, and as the name suggests, the service is a location-based social startup focused entirely on the consumer market. It launched originally as an entirely web-based application, however it now offers both iOS and Android clients. The service itself is free, however the mobile applications cost $1.99 each on their respective application stores. Following launch, the service experienced the usual ‘launch spike’ before user signups settled down at approximately 5000 per month. While these figures were great, Steve knew that the application had the potential to be much bigger: Discover is by no means a niche application, it has a use-case for most people, and is beautifully designed and developed.

Searching for an answer to increase signups, Steve tried a variety of options: advertising, various promotions, viral videos, additional in-app sharing options, affiliate recommendations and many more – but none had any significant effect. The use of advertising in particular was very interesting: Steve paid $1500 for a one month advertising campaign in December 2010, and it resulted in an unbelievably tiny effect on signup numbers for that month (see graph below) – by no means worth the expense. Having largely given up hope, Steve left the application as it was until late January 2011.

He originally purchased the domain ‘www.dscvr.com’ (an example, remember) for use as a shortened link service within the application to enhance sharing: rather than ‘www.discover.com/link’ users would be able to share the url ‘www.dscvr.com/link’. Having purchased the domain however, Steve decided it was time to try something more radical than simply adding a link sharing service. He loved the domain name, and on a whim, decided to rebrand the entire service as ‘dscvr’ instead of the previous ‘discover’. Signups had remained constant for almost six months, and it was time to try something new to re-invigorate the service. On February 1 2011, the new ‘dscvr’ site went live, and signups immediately jumped to the levels that Steve had been trying to reach for the past six months. By the end of February, signups were at approximately 20,000 per month without any additional media coverage or similar. Web traffic remained constant after the name change, only signups increased (traffic eventually increased minimally as a result of the referrals from the increased user base in the months following). In the four months since the name change, monthly signups have remained constant at approximately 20,000 per month: signups are shown in the graph below. What caused this quadrupling of signups however? Was it really just the name change? 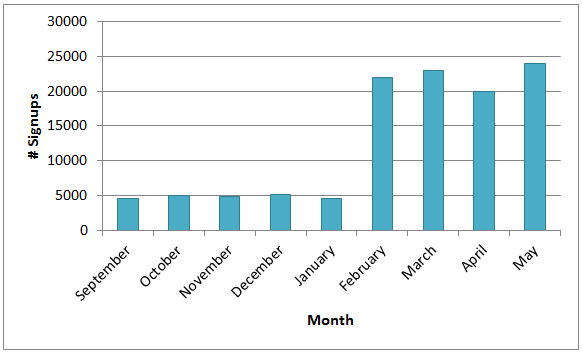 The obvious answer to this question, which came to our minds initially, is that signups quadrupled as a result of the launch of the mobile application clients: Instagram owes their success entirely to the iOS platform, and it appeared applicable to Discover as well. This is not the case however, the mobile clients launched in December 2010 on both platforms (while the sales jump occurred in February 2011), and have at no stage received any promotion as a ‘Featured Application’ or the like on either App Store which may have contributed to user numbers. In fact, 95% of downloads of the mobile applications come from users who have already signed up and are using the webapp. There was no change whatsoever other than the new name: web traffic remained constant, the website or application was not redesigned, the product received no additional coverage for its webapp or mobile apps, and yet signups quadrupled.

This phenomenon illustrates just how critical a great name for your startup or product is: for Steve, the difference in removing just three vowels from the name of his product quadrupled signups, its the kind of jump which every startup dreams of. It demonstrates just how fickle consumers are in regards to choosing a product: Steve’s service is in an exceptionally crowded market, with four major competitors competing in the same space. The name change was just enough to push users towards his service rather than a competitor, and that is an unbelievable result. We’ve confirmed that the user numbers are 100% accurate, and checking cached versions of the website confirm that no site re-design took place. The naming of startups in such a manner, with just vowels removed, is not a new idea by any means – companies have been doing that since the height of the web 2.0 bubble, and yet the name was somehow more desirable for consumers. It’s possible that the name is simply more consumer-friendly, it sounds more ‘fun’, if you will, and is distinctly fresher and more unique than the name ‘Discover’. It does fit in nicely with the social/location-based software scene, and it might be that it is the simple fact that the name is shorter that made the difference.

While a definite explanation for the effect of this name change will never be known with certainty, it is clear from this story that deciding on the name of a product or service should never be overlooked as secondary priority: both users and journalists are extraordinarily fickle in choosing to use or write about one product or another: so make sure the name you choose is perfect.

August 24, 2012
PrevPreviousIs it impossible to succeed in a crowded software market?
NextDon’t think of non-paying users as a burden, but as an advertising expense.Next